Limnodromus scolopaceus
Charadriiformes
This is a large and highly varied group of birds that do not have many outward similarities. Most are water birds that feed on invertebrates or small aquatic creatures. The order is well represented in Washington, with seven families:
Scolopacidae
This large and diverse family of shorebirds is made up mostly of northern breeders that migrate long distances. Their highly migratory nature leads them astray fairly frequently, and rarities often show up outside their normal range. Many of these mostly coastal birds forage in relation to the tides, rather than the time of day. They use a variety of foraging techniques, but the most common techniques are picking food from the ground or water, or probing into wet sand or mud. Those that probe generally have sensitive bills that open at the tips. Most members of this group eat small invertebrates. Many make dramatic, aerial display-flights during courtship. Nesting practices vary, but both parents typically help raise the young. Clutch size is usually four, and both parents generally incubate. The young are precocial and leave the nest within a day of the hatching of the last chick. Most feed themselves, although the parents generally tend the young for a varying period of time. The female typically abandons the group first, leaving the male to care for the young until they are independent.
Common migrant. Uncommon winter, mostly west.
Source of Bird Audio

During migration and winter, Long-billed Dowitchers are usually found on fresh water marshes and sometimes in coastal areas. They are often found on drying lakeshores. In coastal habitats, they are usually in small pools with salt-marsh vegetation. They breed farther north and west than Short-billeds, in grass- or sedge-dominated tundra marshes in Arctic coastal regions in Alaska.

Long-billed Dowitchers usually nest on the ground near water. The nest itself is a fairly deep scrape in a clump of moss or grass, lined with sedge or grass. The bottom of the nest is often damp. Both parents incubate the four eggs for 21 to 22 days. The young leave the nest within a day of hatching and find their own food. Both parents help tend the young at first, but the female may abandon the group soon after they hatch. The male probably stays with the young until they are close to fledging at 20-30 days. Each pair raises a single brood per year.

Long-billed Dowitchers migrate medium distances, not as far as Short-billeds. They come through Washington later in the fall than their shorter-billed relatives, and they winter along the Atlantic and Pacific Coasts. Some first-year birds stay on the wintering grounds in summer.

Until 1950 Short-billed and Long-billed Dowitchers were considered a single species. The Canadian Wildlife Service estimates the population of Long-billed Dowitchers at 500,000. While they are not abundant anywhere in Washington, they are fairly common and widespread. Over-hunting contributed to declines in the late 1800s and early 1900s, but protection from hunting has resulted in a rebound. Range-wide, the number of migrants has increased, and the breeding population has recently expanded into Siberia. It is not fully understood whether this is a shift from other nesting areas, or a true expansion. Habitat loss and environmental contaminants also threaten the current population of Long-billed Dowitchers.

The Long-billed Dowitcher is less common during migration than the Short-billed Dowitcher, but is the more common winter resident in major estuaries on the Washington coast and in Puget Sound. It is generally absent from eastern Washington in winter. Coastally, the first adult migrants start arriving from the north in July and are common from July into mid-September. Juveniles start migrating through in mid-August and are common through October. They are uncommon from November through April. The spring migration is short, and birds are common for only a few weeks in the beginning of May. They taper off to uncommon in late May, and by June they are reported only occasionally. In eastern Washington, they are rare in late June, but quickly become common in July and remain so through October. They are uncommon in November, rare in December, and only occasionally spotted from January through March. In April, numbers start migrating through again, but they are still uncommon. The migration builds in May, and they are common for most of that month. This is a short period, and by the end of May they are uncommon, and by the second half of June they are rarely reported. 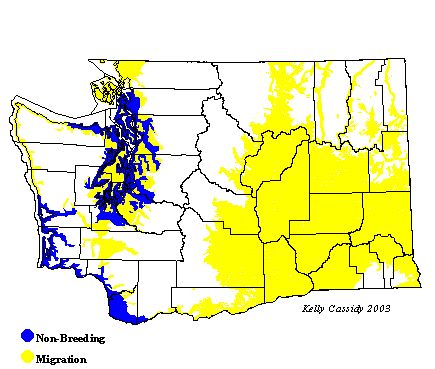